May 09, 2017
Last year during Easter I was in Scotland. We had a massive road trip and I drove like anything. You can read more of that here- Scotland - Driving thorough the mountains, lakes and sea. As I work for a British client I get holiday this time even if I am working in India. After doing some research Lava and Loleygaon sounded to be a good destination. I havent been to these places before. They are not very far from Siliguri. The hotels were booked  online from the West Bengal Forest Department's website.

Lava is a small town in north Bengal's Kalimpong district. Lava is the entry point of Neora Valley national park. Its a small town which has been a prime tourist destination for years.The route to Lava isnt in good condition but very scenic. There are 2 routes to Lava, one via Kalimpong and the other one via Gorubathan. We took the second route becase I didnt drive on this route before. There are lots of tea gardens on the Gorubathan route.


We reached Lava before lunch. The forest lodge is on the top of a mountain. It is surrounded by pine trees and spread across a large area. The cottages are small in size and green in color. The surrounding will make you feel you are in a forest. The large pine trees doesnt let all the sunlight touch the ground. It was actually a jungle few years back and then people decided to make this a tourist spot. Neora valley has become a favorite tourist spot for bird and animal lovers. We saw a deer roaming around and when it saw us it ran away. The forest department lodge is clean and they provide hot water. The food at the tourist lodge was homely but you have to order in advance to get chicken. 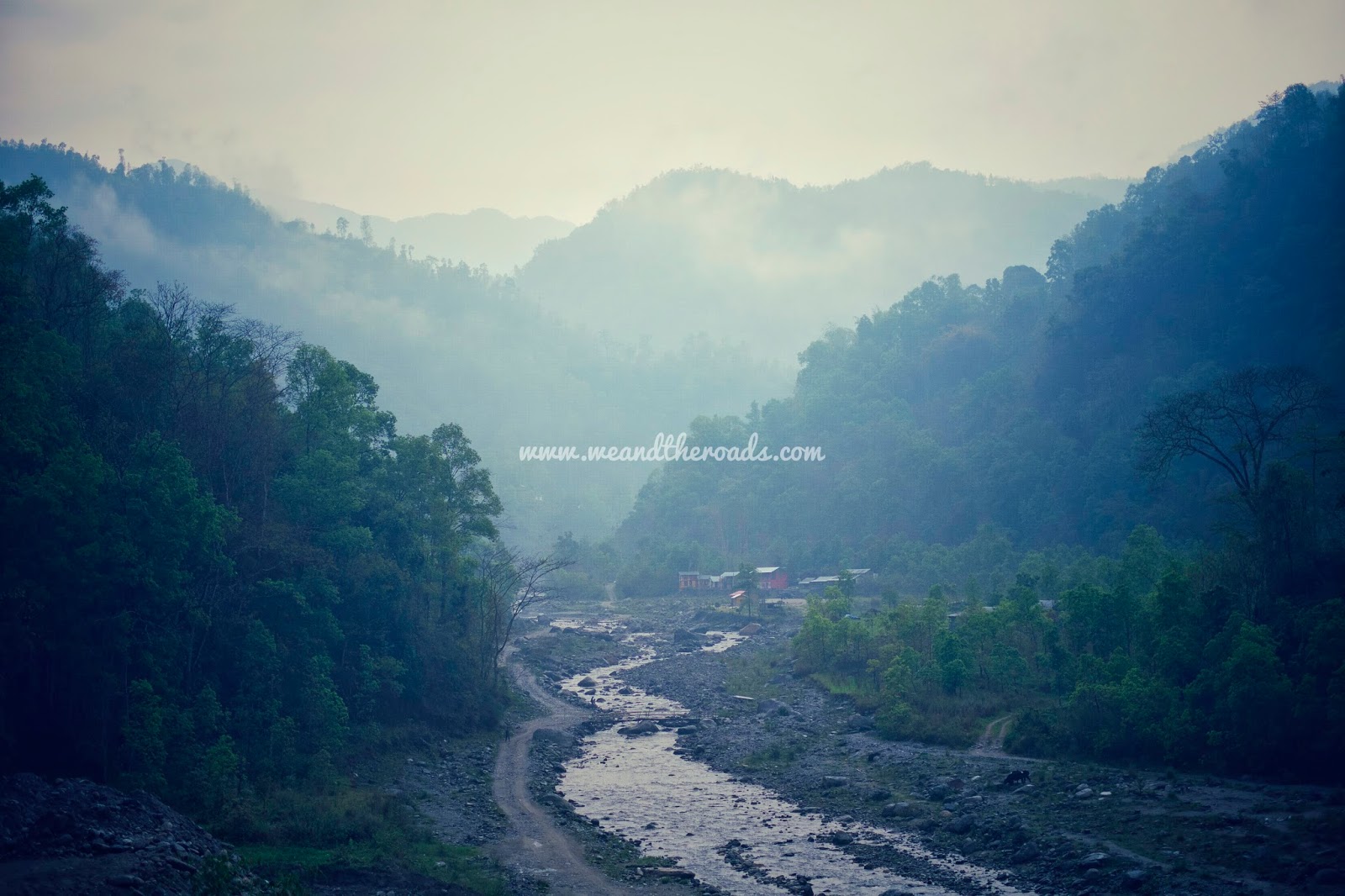 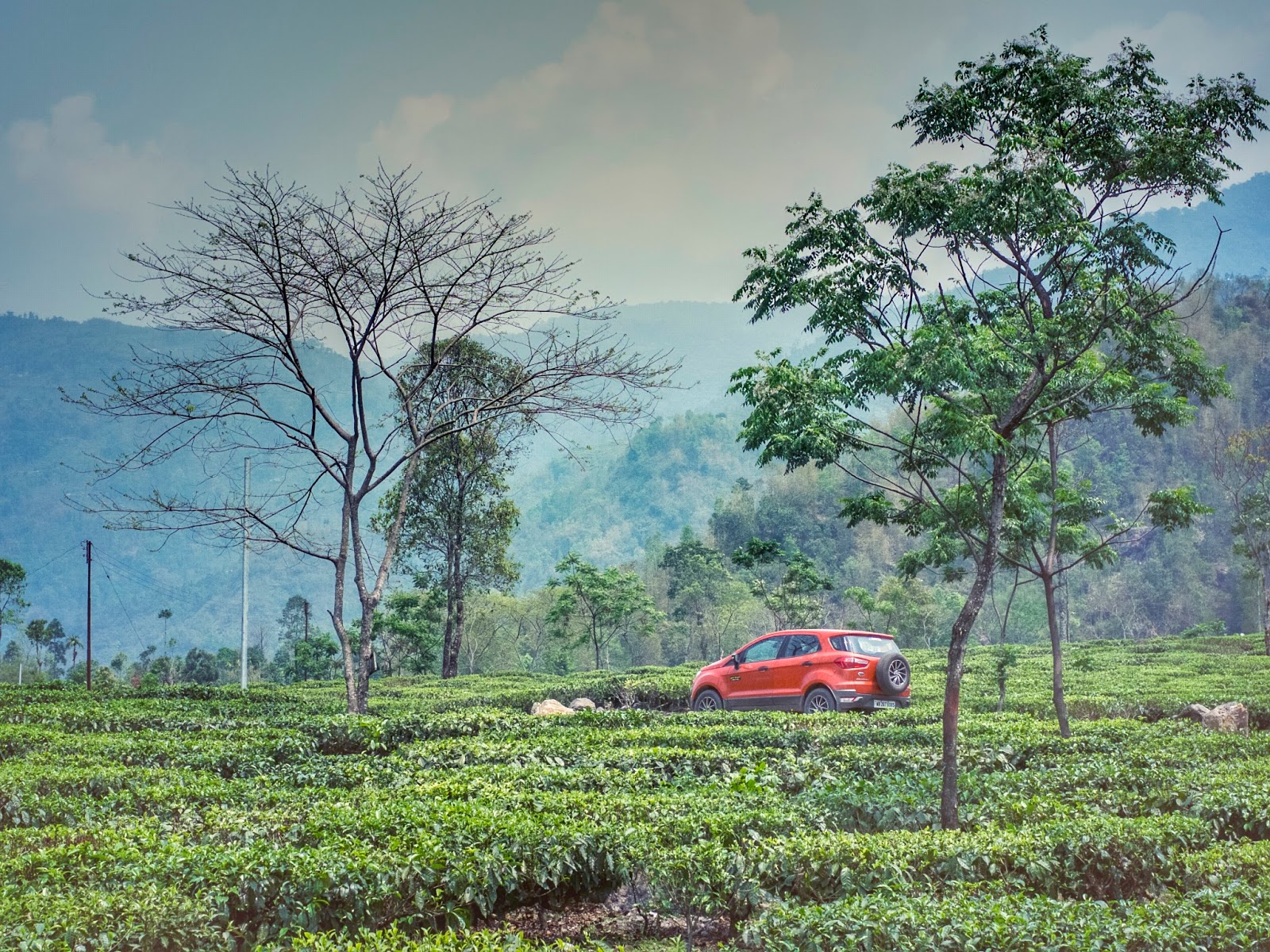 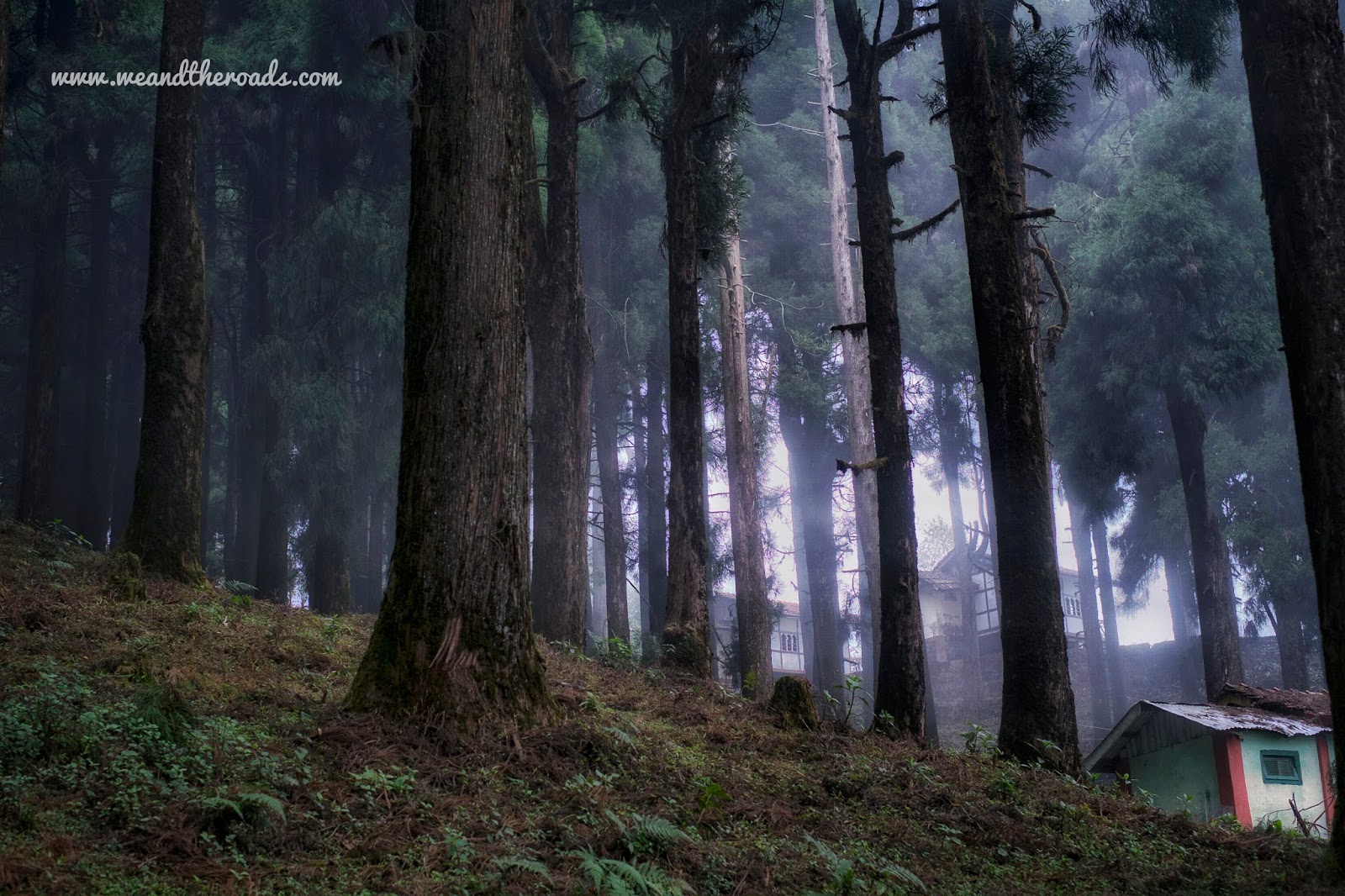 In the afternoon we decided to walk. The weather was soothing. One more reason to visit the mountains is the weather. We were staying at upper Lava which has a small market. The market is very small and solely depends on tourists. Most of the people here are drivers. We had a cup of tea and a bowl of wai wai in a small tea shop. How can one miss wai wai in North Bengal and Sikkim ? 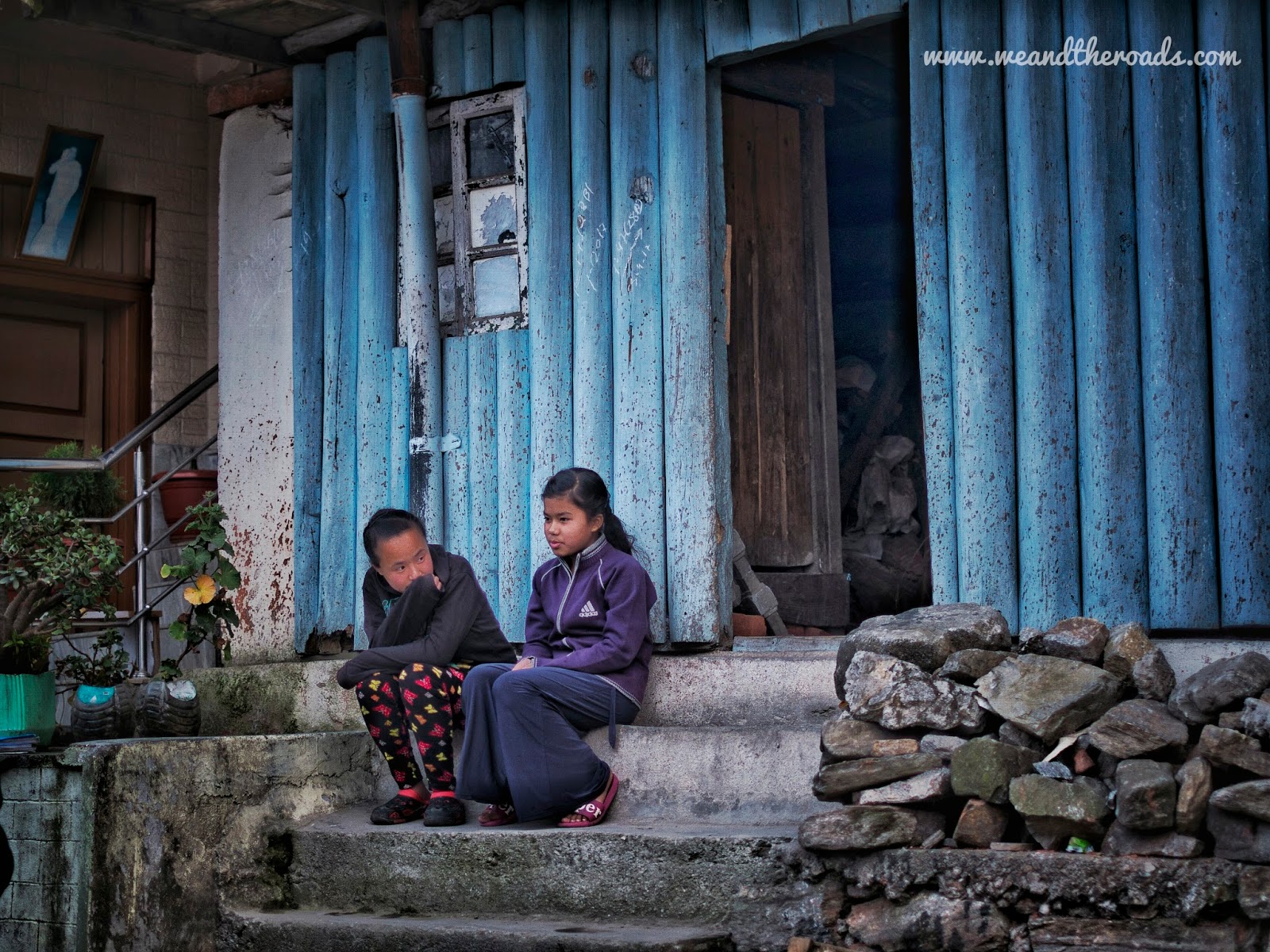 Lava is also famous for the Lava Jamgon Kongtru Monastery. We planned to visit the monastery the next day. Next day we had our breakfast early and went to visit Rishikhola. Rishikhola is in Sikkim or rather on the border of Sikkim and WB. Reshikhola derives its name from the river Reshi.

In the morning suddenly the entire place was covered with dark clouds and it started to rain. The clouds and the rains changed the ambiance of the place. What was dry and yellow yesterday its green today. Clouds were passing us and we could feel the moist. That is the beauty of hills, the weather is so dramatic and unpredictable you wont know how it is going to be. Due to rain the road condition deteriorated rapidly and I couldnt take my car to the water of the river Reshi. Instead we had to walk the last 500 meters and enjoyed the view. The river was almost dry this time of the year. One should visit Reshikhola during summer or post monsoon. 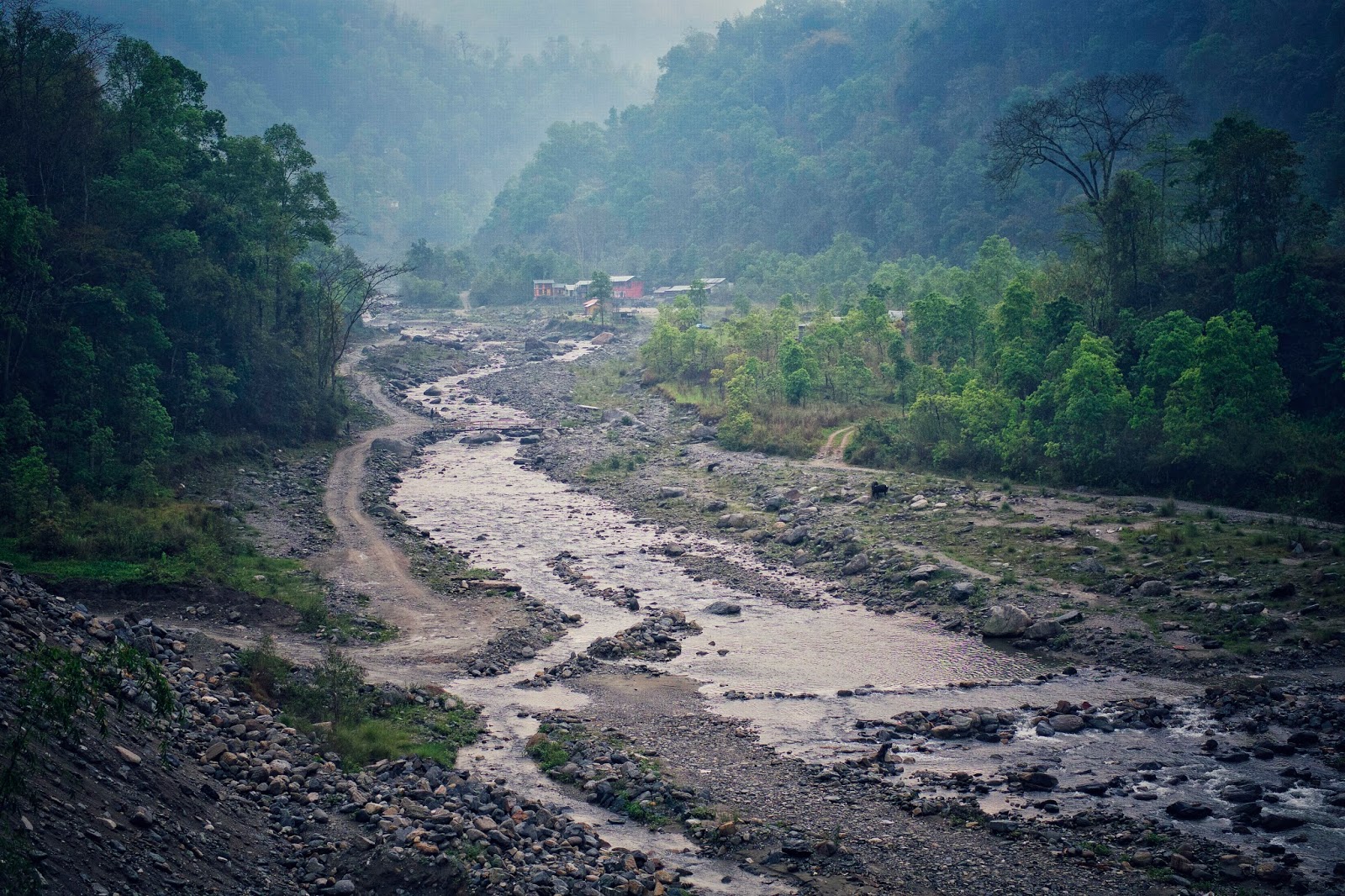 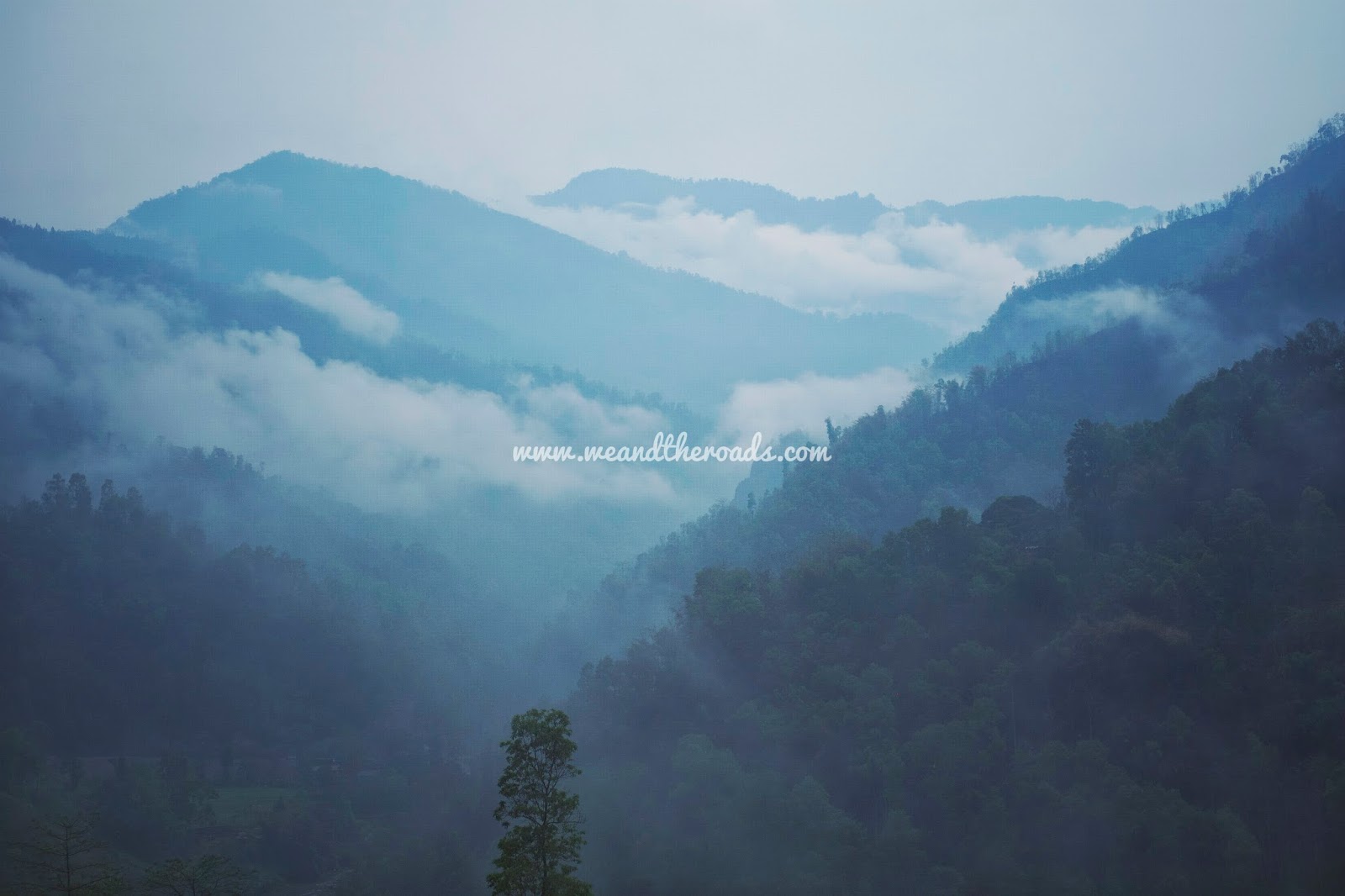 Lava Monastery has a large complex with 2-3 buildings. Beautiful view of the surrounding mountains can be get from the Monastery. The place is calm and serene. The main building has a large Buddha. The inner walls and pillars where very colorful. The monastery also has a building for Tibetan teaching and hostel. We were allowed to sit with the young monks during on of their learning sessions. 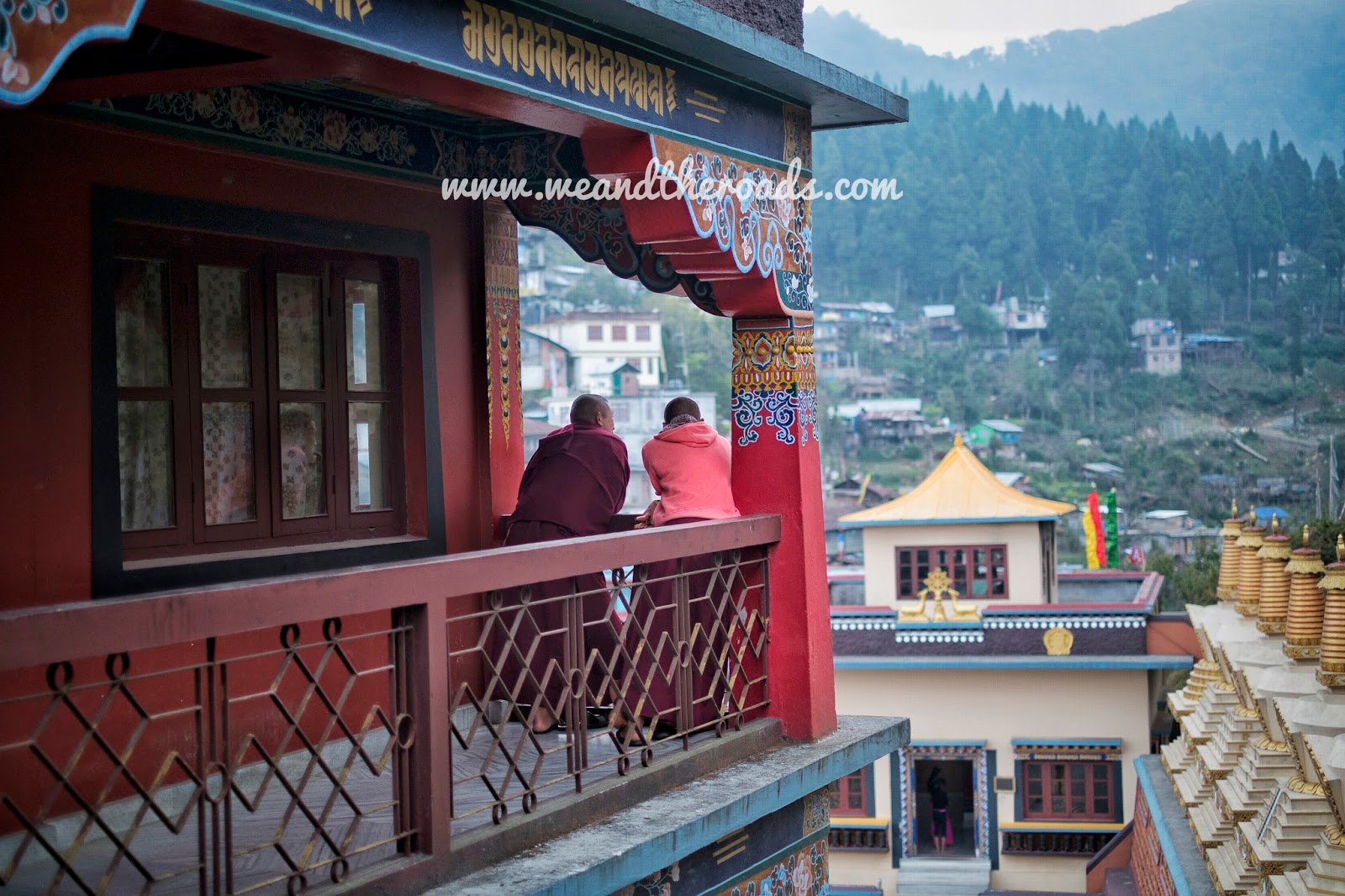 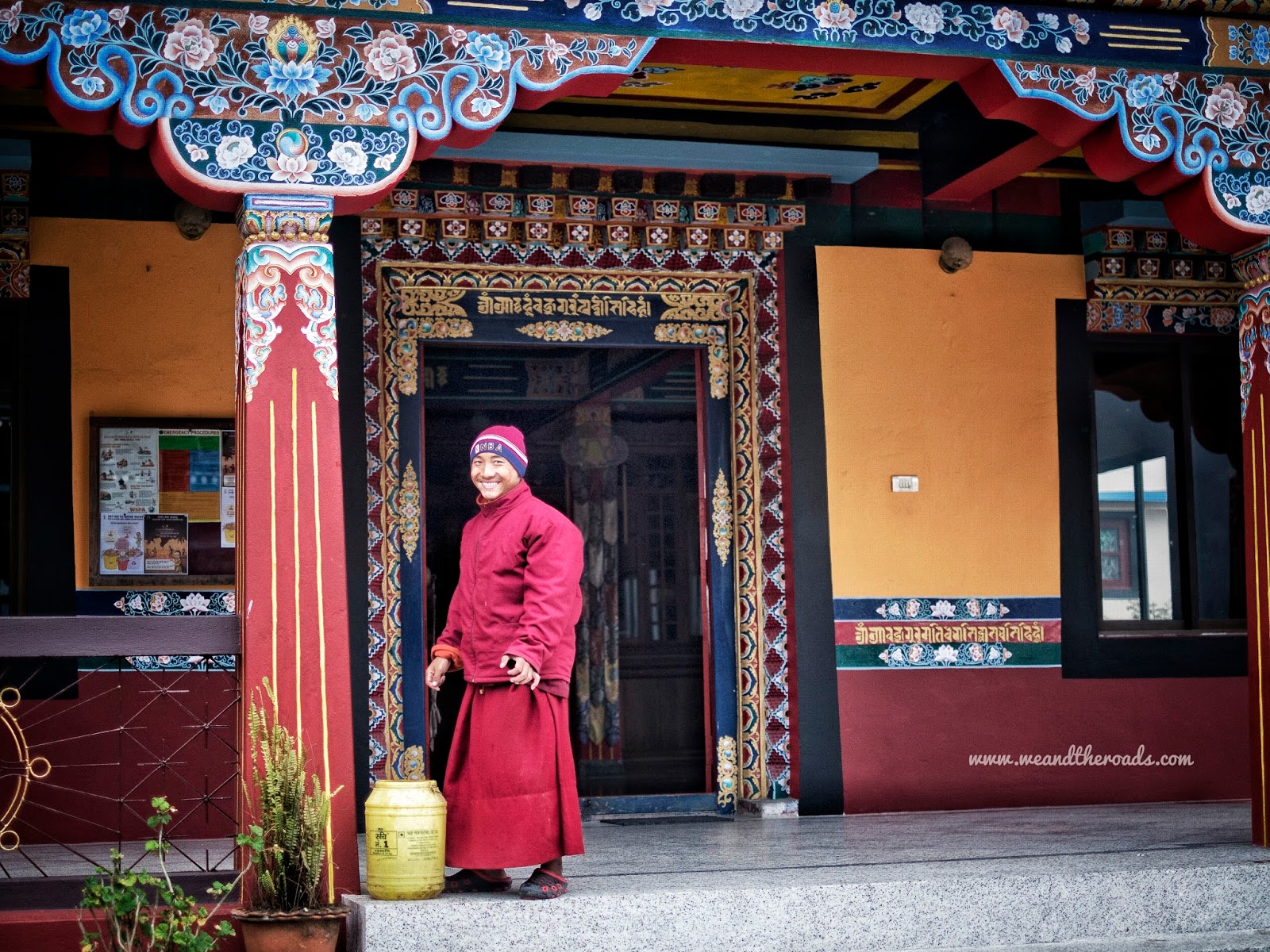 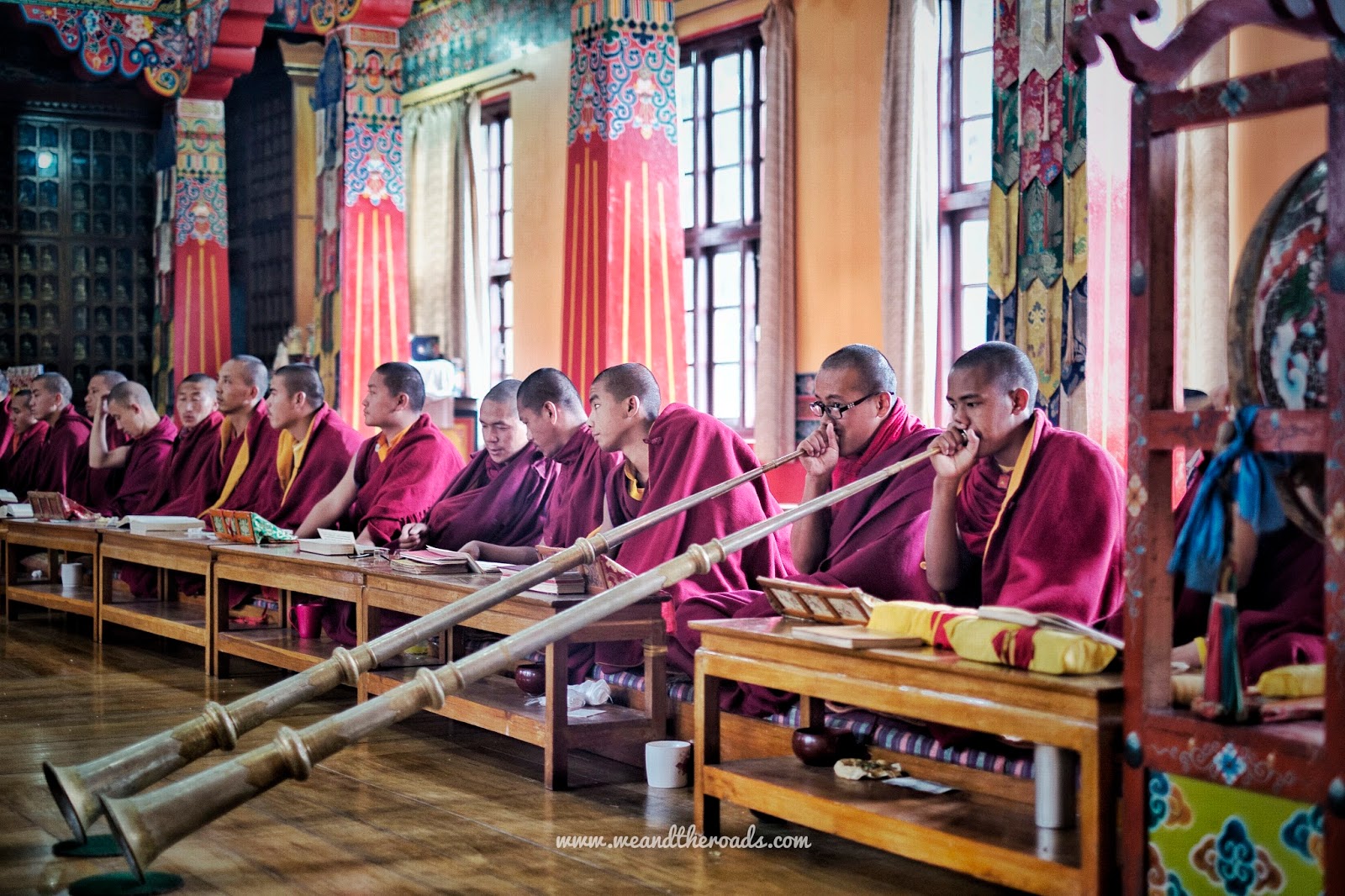 “Living in a monastery, even as a guest rather than a monk, you have more opportunities than you might have elsewhere to see the world as it is, instead of through the shadow that you cast upon it.”

I sat with these young monks for an hour. They had their unique way of studying, they moved their hands as they were reading from a transcript in front of them. There were 3-4 monks who were blowing trumpets periodically. The entire thing was very spiritual. I could have sat there the entire day and listen to their chants but we are bound to time. The day ended with some positive thoughts.

After staying at Lava for 2 days we left the place with good memories. We went to Rishop which was very close to Lava. Rishop was only 5-6 km from Lava but the road is very steep. The steep road went through pine forest. That track is meant for walking and I think walking is better than driving here. You will get closer to nature if you walk through a pine forest. It was so silent that we could hear our own foot steps, birds chipping and leaves falling from the trees.

Rishop is a himalyan hamlet from where Kanchendzonga can be seen properly. There are no obstacle between the Kachendzonga and Rishop. But when we reached Rishop, the peak was already covered with clouds. We had a cup of tea and came back. 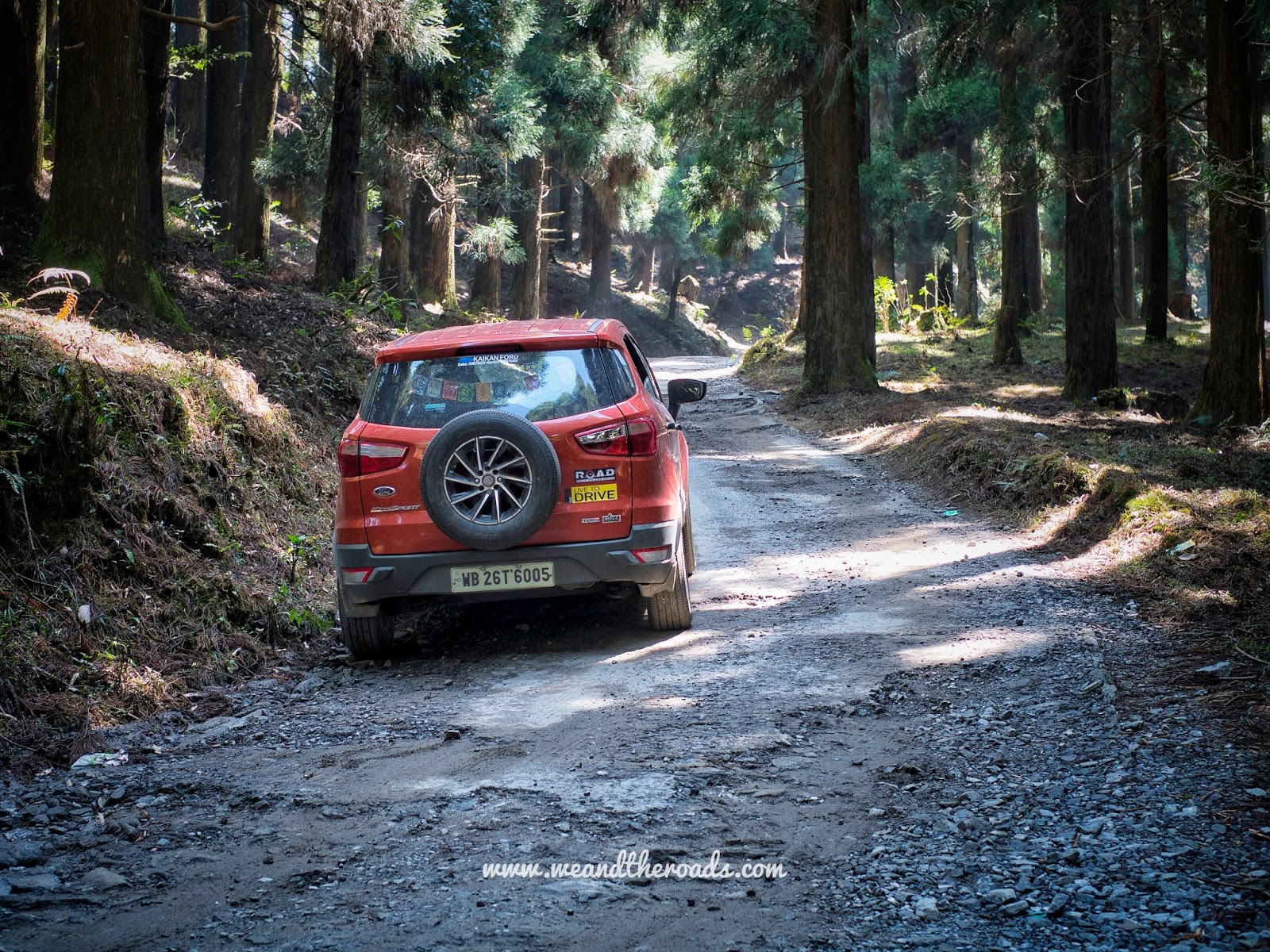 The route shown in google maps to Lolegaon is wrong. So DO NOT FOLLOW GOOGLE MAPS TO GO TO LOLEGAON. Instead ask the locals. The one and half hours journey took us 4 hours because we were just lost. If you are coming from Lava there is also a very scenic route. But we took the Kalimpong route which was also not in a very good condition. After having lunch in a restaurant in Lolegaon we went to visit the famous hanging bridge. And I was so disappointed. I had seen pictures of this bridge before and they looked so natural. To my utter surprise the bridge was only for show. It was build like other bridges in amusement park for kids to hang around. 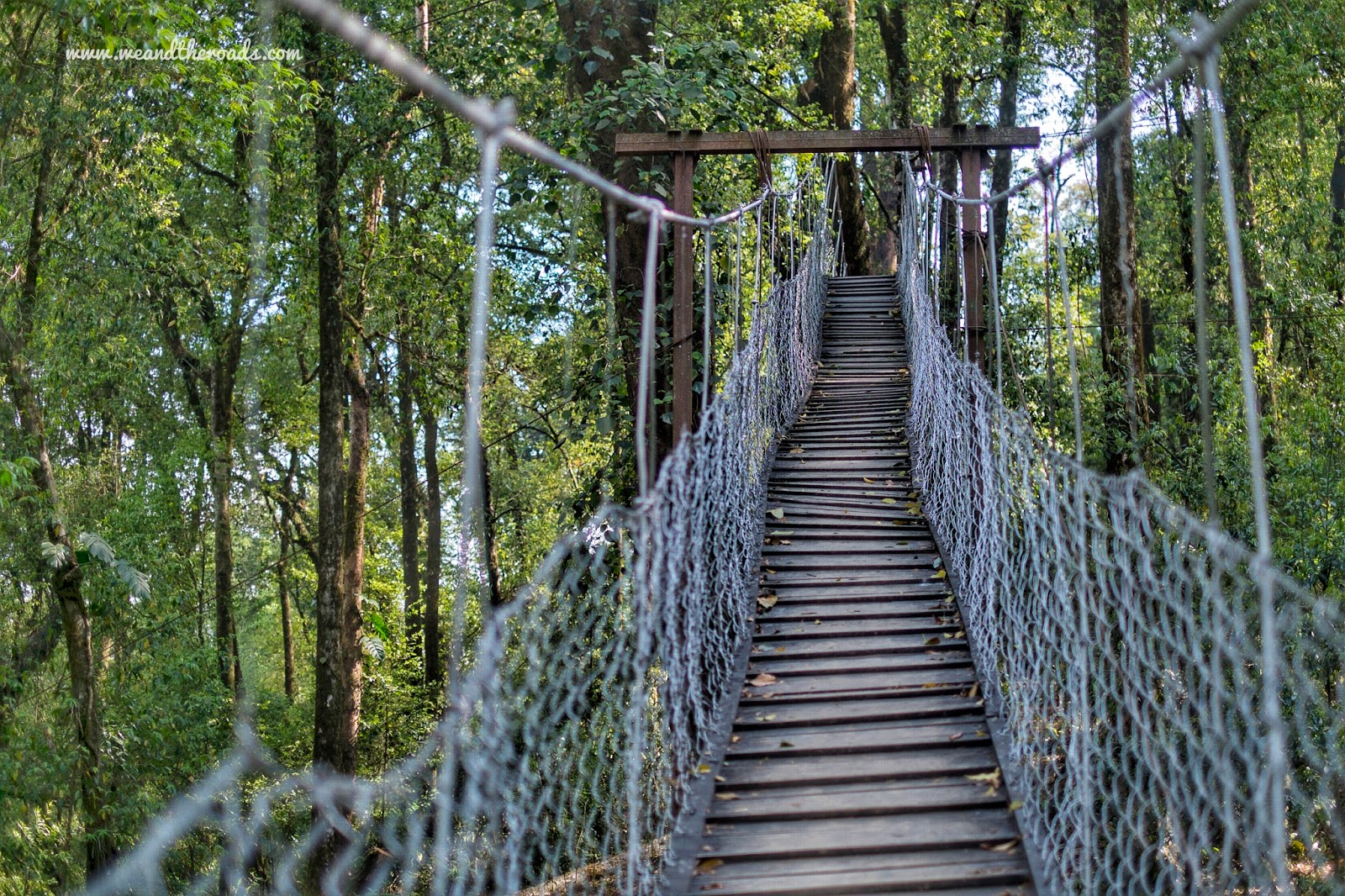 We drove towards Kalimpong as soon as we finished walking the 180m foot bridge. Theres nothing else to see in Loleygaon. The last night of roadtrip should always be booked in a major city or town. They usually have good restaurant, and at the end of any roadtrip good food is a necessity. We found a good bar cum restaurant - King Thai restaurant in Kalimpong. The food is cheap and of good quality. Kalimpong, despite being a city closes down very quickly, so if you are here please plan accordingly. I have crossed Kalimpong many times but this was the first time I was staying here. Wish I had more time and explore this little city in the Himalayas. I am definitely coming back here and spending more time.

February 19, 2016
Kumaon and Garhwal are the two regions of the mountainous state Uttarakhand. The first thing that comes to our mind when we say Kumaon is Nainital. Nainital is one of the most visited hill station in India. However other than Nainital there are several other "Tals" (which means Lake), beautiful hamlets and forests in this region. We started planning from Nov '15 when 2 of my school friends showed interest. We planned to stay in 7 different location, visit as many as we could and hoped to see some snowfall in Munsyari. Kumaon region is famous for outer Himalaya peaks and Panchachuli peaks. These peaks can be seen from places like Kausani, Almora, Chaurkori, Munsyari. After reading many travelogues in Team-bhp and going through road updates and weather updates the plan was finalized. There were lots of places we could visit, but we had only 8 days . Luckily GoIbibo was giving huge discounts on hotels which helped us reduce the overall trip budget. All the hotels were
10 comments
Read more

October 08, 2015
Prologue - Elessaar is the name of the car I own now, i.e. Ford Ecosport. I bought it 2 months back. Odo was around 3200km + before the trip. I bought the EcoSport with the sole purpose of touring. The first destination which we planned to do in our new car was Zuluk. I called up a fellow Team-bhp member Sumitro, who was also interested in this long weekend drive. There was a holiday on 2nd October, which was a friday. Using this holiday we planned a 4 day road trip. The place and other plans was Sumitro's idea. Sumitro had a friend, Norden Bhutia who lived at a place near Padamchen. We planned to do camping on a hilltop which Norden and his family owned for 2 days. They also has their own house before hill top, and in case anyone of us isn't interested for camping he/she could stay at their place.
9 comments
Read more

November 15, 2015
If you want to visit a place other than the beach and himalaya you are left with the midlands. There isnt anything called as "midlands" in West Bengal, i just came up with name because the area I want to refer to sits in the middle. So Purulia, Bankura, Burdwan are midlands according to me. There are various small hills, forests, water reserves in Purulia which can be a perfect weekend destinations for Bengalis. I have already been to Garpanchkot last time so this time we decided to go to Ayodhya hills. Ajodhya Hills is located in the Purulia district of the state West Bengal, India. It is a part of the Dalma Hills and extended part of Eastern Ghats range. Highest peak of Ajodhya Hills is Gorgaburu. The nearby populated town area is Bagmundi. There is a myth which is related to Ramayana, but that is not the reason why its name is Ayodhya. According to Hindu mythology, Rama and Sita had come to Ayodhya Hills and stayed during their exile. Sita was thirsty and Ram pierced
5 comments
Read more